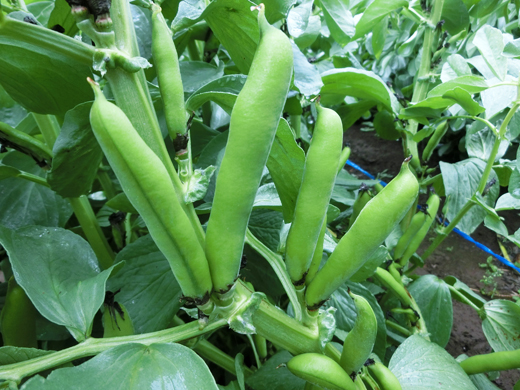 (Fava beans have been part of the eastern Mediterranean diet (Egypt, Greece, Italy) for at least 4000 years. There are stories of monks from India traveling through China who brought fava beans to Japan in the Nara Period (710-794 AD).  However, the first written evidence of sora mamé being consumed in Japan is in a dictionary-like document, Tashikihen (多識篇) published in 1631.

Today, favas (what the Japanese call sora mamé) are welcomed to Japanese tables as spring begins to shift towards summer.

Both of these evoke the image of stalks in the field with pods pointing to the heavens.

Sora mamé can also be written as: 蚕 COCOON (kaiko) +  豆 BEAN. This relates to the appearance of the pods themselves, which look vaguely like silkworm cocoons.

By the way, HIBARI is a Skylark and dishes made with fava beans often include hibari in their name. 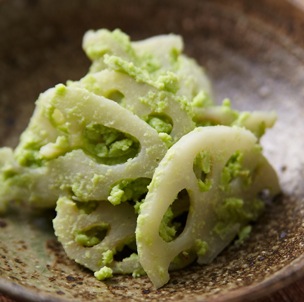 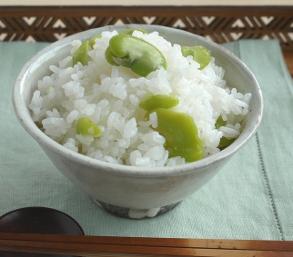 RAINY SEASON KITCHEN TSUYU (梅雨 literally, "plum rain") comes to the Japanese archipelago every year as spring turns to summer. The constant dampness of tsuyu encourages the growth of kabi (mildew, and molds) requiring a strategy (taisaku 対策) ... and diligence... Green Teas 緑茶 RYOKU CHA Green teas are green because enzymes responsible for oxidization have been prevented from doing their (dark and discoloring) work. The Japanese halt oxidation by steaming freshly picked leaves, while the Chinese typically pan-fire or roast tea...