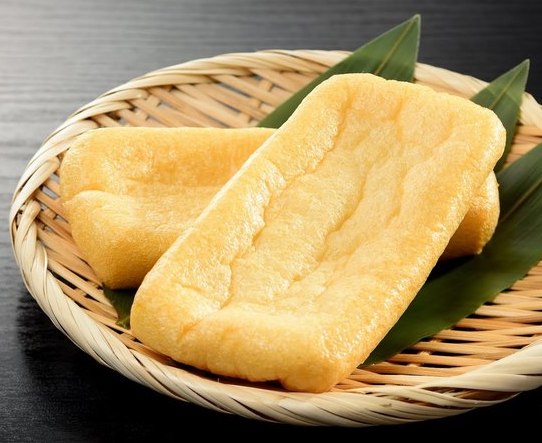 Japanese culinary culture is filled with references to foxes and their fondness for abura agé (fried tōfu). Names of dishes made with fried tōfu will often allude to this fox connection.

Sometimes you see the word itself, kitsuné (fox) as part of the name of the dish. Kitsuné udon or soba are soup-noodles garnished with sheets of fried tōfu that have been simmered in a (slightly) sweet soy broth. The color of fried tōfu is often referred to as kitsuné iro or “fox-colored.”

Other times you will encounter the word inari. Inari-zushi are sweetly soy-simmered pouches of fried tōfu stuffed with vinegar-seasoned (sushi) rice. Inari shrines are dedicated to rice cultivation; fox-figures guard the entrance to these shrines.

At other times, the word Shinoda will appear on menus. When it does, Shinoda is capitalized because it is the name of a place, Shinoda Forest, near present-day Osaka. The forest is the home to many legendary foxes, including one female fox that changed to human form and married a hunter (foxy lady!)

In the KANSAI area (Kyoto, Osaka, Nara, Kobe) the strong association of abura agé with fox legends is evident as a preference for TRIANGULAR shaped fried tōfu that is meant to suggest FOX EARS.

In the KANTO PLAIN area (Tokyo, Yokohama, Kamakura, Chiba, Saitama) the strong association of abura agé with inari shrines and RICE is evident as a preference for RECTANGULAR shaped fried tōfu that is meant to suggest freshly harvested RICE SHEAVES (tawara).

DOWNLOAD recipe for Foxy Fried Tofu to either stuff with sushi rice or garnish bowls of noodles. Salt-Cured Cherry Blossoms & Leaves The blossoms and leaves of certain varieties of sakura are made edible by preserving them in salt, in a process known as shio-zuké. Deeply colored yaezakura blossoms are especially prized. When it comes to salt-curing leaves,... Pom Pom Sushi Temari-Zushi 手まり寿司 Like many frugal Japanese women who managed households in the early and mid 20th century, my mother-in-law, Kiyoko Andoh, practiced thrift in and out of the kitchen. She saved bits and pieces of cloth, turning them into quilted... KOGOMI こごみ・屈み Fiddlehead of the ostrich fern; Matteuccia struthiopteris What the Japanese call kogomi is commonly known in North America as fiddlehead ferns; they can be found in many parts of Canada, New England, the Midwest and the Pacific Northwest. In Japan,... ONI wa SOTO          FUKU wa UCHI Throw out the ogres!      Bring in Good Fortune!節分 SETSUBUN means “break between seasons” and such breaks occur many times during the year. However, today Japan celebrates the setsubun break that comes early in February and...